First view of Baoli in the Red Fort of Delhi

What looks like the most untouched stepped well was actually a garbage dumping site for many years. When British took over the Qila-e-Mualla aka Quila-e-Mubarak aka Red Fort, they decided to make some more space for their residence. This beautiful stepped well, built by the Mughals also fell prey for their greed for space.

The British installed huge girders across the platform to create rooms in there. Post Independence, when Indian Army took over, they turned this place to a dumping site. Recently, Archaeological Survey of India got the charge of this place and they cleaned the beautiful stepped well and removed the girders.

The history stone there says that the INA officers Shah Nawaz Khan, P. K. Sehgal and G. S. Dhillon were confined here in 1945-46 during the freedom movement

This baoli has a unique structure with stairs from two sides at 90 degree. The two stairs combine at a pit, which is attached to the well. The amazing part was that we were able to listen to the sound of water seeping from the ground into the well.

The stairs on two sides 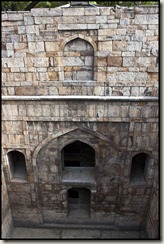 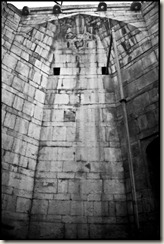 Well behind the steps 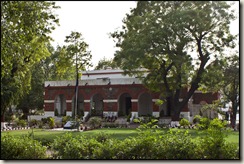 The CISF Quarters opposite to the Baoli