Archive for the tag “Lodhi”

“Aap Dilli ki Baolis pe kyon nahi kuchh likhte”, said Mr. Vikas Arya from Aryan Books International when I met him last year. He wanted me to do a coffee table book on Baolis for him. For those who don’t know, Aryan Books International is a famous publisher dedicated to heritage & history books. Mr. Arya, an IT Engineer left his lucrative and promising IT career to dedicate his life towards the rich culture of India. His company reprinted several old books, which were continuously out of print due to lack of readership. If you are a heritage lover and interested in reading, more than half of books on your shelf are published or distributed by Aryan Books for sure. I met him when I was doing some IT implementation for one of Delhi’s major distributor ‘Delhi Book Store’. I told them that I am looking for some old books, but it appears that they are out of print. I was told that Aryan Books have re-printed some of them. So Delhi Books Store helped me reach Aryan Books and that’s how discovered this huge treasure of amazing books, that I always wanted to read. I told Mr. Arya about my club ‘Delhi Heritage Photography Club’ and my initiative ‘www.monumentsofdelhi.com’. At this, he said that I should be doing something about the water bodies, specially the baolis of Delhi. My first reaction was to call Janab Sohail Hashmi, as he is the only person I know, who can give authentic information about Delhi’s water bodies. And hence, the research started and have been going on since then. We have so far found 22 Baolis and still searching for more. (Best part is that in govt. records, only 16 baolis exist out of 100+ in Delhi)

What is a Baoli?

Baoli is a stepped well in which there is a water source, which can be reached through a flight of steps. In Delhi region, these baolis are connected with a Well on one end and a long flight of stairs connects to different chambers at every level. The well has a small opening from where water fills in the water pit at the end of stairs. Few exceptions in Delhi, where there is no separate well, but the main pit of Baolis is the well itself are Nizamuddin’s Baoli, Hazrat Kaki’s Baoli, Feroz Shah Kotla’s Baoli and Tughlaqabad Baolis. Other famous baolis are Rajo’N ki Baoli, Gandhak ki Baoli, Ugrasen ki Baoli, Red Fort Baoli and Old Fort Baoli. Besides, there are lesser known Baolis like Loharheri Baoli (Dwarka), Talimabad School Baoli (Talimabad near Tughlaqabad), Wazirpur Baoli (RK Puram, Sector 5) and Muradabad Pahari Baoli (Muradabad Pahari near Vasant Kunj).

Baolis are also known as Bawdi, Barav, vaav, bain and pushkarini. During british raj, they were written as ‘diving wells’ in all official govt. documents.

Now let’s get back to our original topic. While I was doing my research on Baolis, I found several hidden baolis. But I also found references of Baolis, which were there till early 1900s and today are no where to be found. The most important of these are Palam Baoli and Khari Baoli. We may not be able to remove the dense settlement over them to unearth these buried baolis. But there is one Baoli, which we can still revive. This baoli is situated within the famous Lodi Garden of Delhi.

Maulvi Zafar Hasan prepared a listing of all 1300+ monuments in Delhi  in 1919 as part of his job at Archaeological Survey of India. His book is called ‘Monuments of Delhi, Lasting splendour of the Great Mughals and Others’. On page 37 of volume 2, he mentions of a Baoli in Khairpur Village. It should be noted that the present day Lodi Garden was originally Khairpur Village and the families living in there were shifted in 1936, when the British decided to build a nice park here. Maulvi Zafar Hasan writes:

To the N. E. of the Shish Gumbad are the remains of a garden, the four walls of  which, brick built, are broken in several places. The double storeyed entrance is in no better condition. To the south of the latter is a mosque also ruined and neglected. The baoli in front of the entrance outside the enclosure is in the same condition. In the centre of the garden is a small brick built enclosure furnished with arched openings, apparently intended for a tomb but now containing no grave. 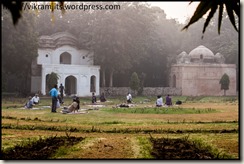 The above two pictures are of the said entrance and mosque respectively. They are situated ~200 yards to North East of Shish Gumbad and ~160 yards to south of Lodhi’s Tomb. The picture on right gives a view of the garden reached through this entrance. Garden is used by people for their morning exercise. A Yoga camp is held here daily.

Zafar Hasan’s listing suggests that this Baoli is not of any major importance. Hence, it is not important to protect it. Lady Willington, wife of Governor-General of India, Marquess of Willingdon, when landscaped this village and converted it into a beautiful garden for British officers, covered this baoli with earth and buried it forever. Upon inauguration on April 9th 1936, this park was known as Lady Willingdon Park. After Independence, Indian government renamed it to Lodi Garden. We know of a water stream running through this park, on which Athpula (bridge) was made. It is a possibility that the water stream be a ‘barsati naalah’ and gets filled only during rainy season. The land around this place must be having high water table at that time. Therefore, the baoli must not be very deep and given the fact, that the village here was not a very big or prosperous town, the baoli may not have any significant or distinguishing architecture. I however feel that if the government and the Archaeological Survey of India tries to restore this Baoli, it will be a great attraction for visitors.