Archive for the tag “Taj”

This article is part of my Taj Mahal Series

On 17th June 1631, as Arjumand Banu Begum, aka Mumtaz Mahal, the most favourite wife and Empress Consort of the Mughal Emperor Badshah A’la Azad Abul Muzaffar Shahab ud-Din Mohammad Khurram, aka Shah Jahan died, the Mughal Court started planning for the grand burial of the late queen. She left the mortal world while giving birth to her 14th child in Burhanpur, where her husband, the Emperor was fighting with rebels. She was buried in a pleasure garden called Zainabad, originally constructed by Shah Jahan’s uncle Daniyal on the bank of the Tapti River. The Emperor went into secluded mourning for almost a year and when he came out, he was a changed man with all the sadness reflecting from his face and attire. Meanwhile, in December same year, her body was taken out from her grave and in a golden casket, transported to the then capital of Mughal Empire, Agra. There, the body was buried in a garden on the banks of Yamuna and as Emperor reached Agra after finishing his campaign in Deccan, the garden was taken from the king of Jaipur, Raja Jai Singh for an exchange of a prestigious piece of land within city. In 1632, the construction of the grand mausoleum started, which was later called “The Taj Mahal”

While there are numerous things to talk about the great Taj Mahal, this article focusses on the foreign connection of the Taj. In coming editions, I will try to write more about Taj and unveil more secrets of this magnificent wonder of the world.

Taj Mahal was not built overnight. It took decades to reach the final finial and plant the last tree. Architects, Masons and Material from different countries was sourced to construct this finest piece of Mughal Architecture. The structure was built using rubble masonry, covered with layer of bricks, which were baked locally. The sandstone used in the tomb was sourced from Fatehpur Sikri, which is around 40-45 Kms away from Agra. The famous white marble for Taj Mahal was brought from Makrana in Rajasthan (some 400 Kms away). The marble of Makrana is known to be finest and decorates many other famous buildings including Victoria Memorial of Kolkata, National Assembly of Pakistan, Jain Temple of Mysore & Dilwara, Ambedkar Park of Lucknow, Birla Temple of Jaipur and Makrana Emitra Campus. Jasper for the building was sourced from the region of Punjab. This building is decorated with Jade and Crystal, which were imported from China and turquoise came from Tibet. The Lapis Lazuli was sourced from Afghanistan, Sapphire from Sri Lanka and Carnelian from Arabian region. Onyx and Amethyst came from Persia. It is said that in all, 28 types of semi-precious stones were used on Taj Mahal, which were sourced from all over South Asia. Some say that the cost of the construction of this building was around 50 Lakh Rupees, while some debate that it might have gone up to 6 Crore (Which sounds a little impractical, given the state of royal treasury back then).

Ustad Isa, an architect from Shiraz, Iran is considered by few to be the chief architect of Taj Mahal. While this claim was challenged by few, who named Ustad Ahmed Lahauri (also from Iran) as the chief architect. The claim of Ustad Ahmad being the chief architect was put forth by his son Lutfullah Muhandis and was verified by many modern research scholars. Abd ul-Karim Ma’mur Khan and Makramat Khan were the Imperial Supervisors for the construction. Ismail Afandi was bought in from Ottoman Empire to design the dome. Qazim Khan from Lahore was asked to cast the solid gold finial. Amanat Khan from Shiraz (Iran) was the chief calligrapher of Tomb. Mir Abdul Karim and Mukkarimat Khan of Shiraz were incharge of finances and management of daily production. Puru from Benarus in Iran was the supervisor of all architects. Chiranjilal, a lapidary from Delhi was the chief sculptor and mosaicist while Muhammad Hanif was the supervisor of masons 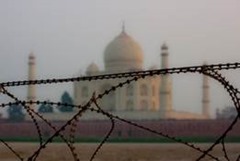 Another interesting name that appears in picture is of Geronimo Veroneo, an Italian, who lived in Agra and died in Lahore in 1640. The European Scholars celebrate him as the chief architect of Taj Mahal. This claim was made by Father Sebastian Manrique, an Augustinian Friar whose purpose in India was to secure the release of Father Antony, who was being held as a prisoner by the Mughals in Lahore. And it was here in Lahore that he met the executor of Geronimo, named Father Joseph De Castro. It was Castro who told Father Sebastian about a famous Venetian jeweller who came to India in the Portuguese ships but died on his way in Lahore and was later buried in the Roman Catholic Cemetery Padres Santos in Agra. However, Jean-Baptiste Tavernier, a French gem merchant, who was travelling in India during the construction of Taj Mahal has given the most accurate account of its construction and did not mention anything about Geronimo. Peter Munday, another traveller who has left a complete record of his travels, was in Agra around that time. He knew Geronimo well and mentions that he met him several times, but does not state anything more than the fact that he was a goldsmith.

While there is lot that can be said and written about Taj, I reserve more for my future articles. No doubt, this marvel leaves its impression on every spectator and reminds us of the great artistic capabilities of the people back in 17th century.

The Auction of Taj Mahal

This article is part of my Taj Mahal Series

“Henceforth, let the inhabitants of the world be divided into two classes – Them as has seen the Taj Mahal; and them as hasn’t.”

In my series of articles on Taj Mahal, I am going to introduce you to an interesting episode of our history, where one of the British appointed Governor General, Lord William Bentinck, who had absolutely no respect for or interest in Indian Heritage, decided to auction off the Taj Mahal.

When celebrated English author, poet and illustrator Edward Lear wrote the quote mentioned above, he tried to depict the mesmerizing sight of the great Taj Mahal. Countless visitors since ages have praised the beauty of Taj. But one man, sitting on the top position had some other evil plans about this beauty. Lieutenant-General Lord William Henry Cavendish-Bentinck became the Governor General of India for just two years from 1833 to 1835. In these 2 years, he saw the bad state of finances. To improve the financial state of the government, he took a very stupid decision, which was to auction, what we today regard as the ‘Wonder of World’.

During British Raj, it was a practice of Rich British families to visit decorated Mughal buildings and dig precious stones to be taken back as souvenirs. Taking a hint form this malpractice, Lord Bentinck decided to dismantle the Taj Mahal and auction off the precious marble. Part of the marble was to be sold to Indian nobles and rest was to be sent to Britain, for further sale. Idea of trying to sell majority of marble in India rather than in Britain came because an earlier attempt to sell marble from Red Fort of Delhi was not a successful. The cost of transporting marble to England came out to be more than the bid.

The British had earlier sold the Taj Mahal to Seth Laxmichand of Mathura for Rs. 1.5 Lakh, who, when reached the Tomb for possession, faced a major opposition from the Hindu and Muslim residents of Taj Ganj, the colony established by Emperor Shahjahan, which is said to have the descendants of workers, who made Taj Mahal. Seth Laxmichand had to retreat and the sale was called off.

Then Lord Bentinck came with better arrangements and ensured that such problems do not hamper the auction. On July 26, 1831, an advertisement to sell Taj Mahal was published in an English daily of Kolkata. Auction started with seths of Mathura and Rajasthan. The next day, auction continued with English Bidders. Once again, the Taj mahal was sold to Seth Laxmichand for Rs. 7 lakh. But the cost of dismantling and taking off the marble was so high, that it was practically impossible to make profit out of it. Once again, the auction had to be called off.

Lord Bentinck went back to his thinking table and finally managed to sort out the cost issue. Historian, Prof. Ramnath in his book ‘The Taj Mahal’, mentions about this incident. British author HG Cannes also mentioned about this incident in his book ‘Agra and Naibr Hoods’. They wrote Lord Bentinck finally managed to arrange an auction, which cannot be called off as all the hurdles have already been taken care off and this one was well planned.

As the second auction was arranged, the seths and the British once again were invited. Then came into picture, an unknown soldier from the British Army, who secretly reported the matter to the Member Parliament of his constituency back in England. The matter was taken to the British Parliament and London office immediately ordered the Indian Governor General to give up this stupid idea. We will never know who this unsung soldier was, who saved the precious Taj and gave India its share in the list of Wonders of World.

Much later, Lord Curzon, called for an auction on 7th February 1900. Many old paintings and precious carved stones, which included some material from Taj Mahal was auctioned. Even Lord Hastings had many precious stones from Taj Mahal sent to London.

However, there have been incidents where looters didn’t bother to do the formality of auctioning. Historian E.B. Havell records that the Jats of Bharatpur, under Suraj Mal, carried away the fountains and the fish tanks of Machhli Bhawan of Fort. Later, other parts were taken by Lord Bentick for auction. Similar looting was done at Taj as well. In 1784, the Jats carried away the silver doors of Taj, which were estimated at Rs 127,000, when installed by Shahjahan. They were studded with nails, the heads of which were silver rupees.

Manucci writes, the first plunder of Taj took place in 1691, when Jats, under the command of Rajaram and Ramchhera took away great gates of bronze, studded with precious stones and plates of gold and silver.

No matter what Taj has seen and suffered, it is still counted as one of the most beautiful pieces of architecture in Indian Subcontinent.