Archive for the tag “Khilji” 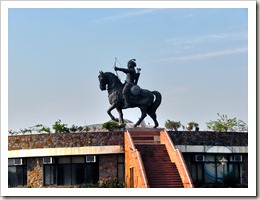 Search this title on Google and all you will find is “Prithvi Raj Chauhan”. He was a brave fighter and a noble emperor of Ajmer and Delhi who ruled from 1169 CE to 1192 CE. Tales of his bravery are common folklores amongst Indian families. But very few learned writers talk about the Hindu Emperors, that came to power after him. In this article, we will talk about the Emperor, who ruled entire Northern India and virtually the entire India from the throne of Delhi.

After Samrat Prithvi Raj Chauhan was captured by Muhammad bin Sam (Muhammed Ghori) in the second battle of Tarain (1192 AD), the Sultanate Period started in India. Rulers like Qutb-ud-Din Aibak, Iltutmish, Ghiasuddin Balban and Razia Sultana were prominent during the Slave Dynasty, the first Islamic Dynasty to rule the region. The last emperor of Slave Dynasty ‘Kayumars’ was dethroned by his own guardian Jalaluddin Firuz Khilji, who founded the Khilji Dynasty.

Khusro Khan, the Hindu, who converted

Alaudin Khilji attacked Gujarat in 1297 AD under the command of Ulugh Khan and Nusrat Khan and defeated the last Hindu Ruler of Gujarat Karan Vaghela. Before Khilji forces killed leaders Hamirji Gohil and Vegado Bhil near Somnath, Vagedo took a promise from one of his loyal to escape and take revenge from Khilji. This guy came to Delhi as a war prisoner and converted to Islam.  He was given the name ‘Hasan’ and later Qutubuddin Mubarak Shah of Khilji dynasty gave him the name ‘Khusro Khan’.

It is said that Khusro Khan got Alauddin Khilji killed through his friend Jahiriya and later managed to kill his master Mubarak Shah and declared himself the king of Delhi. But in just 4 months, he was captured and killed by Khilji’s loyal general Ghyasuddin Tughlaq, who after that formed his own dynasty by the name ‘Tughlaq Dynasty’.

Khusro Khan was against laws which favoured tax system based on religion. It is said that he was against women being treated as war booty. He took strong steps to prevent harems and sex slaves. Perhaps his own sufferings made him think this way but this caused nobles to go against him.

Hemchandra Bhargawa or Hemu (1501-1556), son of Rai Puran Das, born in Alwar Rajasthan was the Chief of Army & Prime Minister during the regime of Adil Shah Suri of the Suri Dynasty. He fought 22 battles in a row without even a single setback before his emperor was captured and killed in Fathpur. In his 22nd victory on 7th October 1556 against Tardi Beg Khan of Humayun’s Army, he crowned himself as the Emperor of Delhi instead of establishing the Islamic Flag of Suri Dynasty. He took the name ‘Samrat Hemchandra Vikramaditya’. Some say that he was very much influenced by the famous Vijaynagar Empire of South and based his kingdom on those lines.  Although Hemu’s rule was very short, he was able to struck coins bearing his name.

Hemu was a powerful general who captured the Fort of Gwalior, Agra and Delhi, which were considered to be the most powerful forts of India. He captured areas which today comprises of Bihar, Uttar Pradesh, Madhya Pradesh, Delhi and Haryana.

His rule lasted only 1 month when on 5th November 1556, Mughal armies fought with him in the battle of Panipat and captured him in unconscious state. It is said that Bairam Khan asked Akbar to behead Hemu to earn the title of Ghazi. Akbar, despite of being a kid, replied that he is already dead and if he had any movement or breathing, he would have killed him. So upon Bairam Khan’s request, Akbar struck Hemu and later Bairam Khan beheaded him. His head was sent to Afghanistan to be hung outside the Delhi Darwaza in Kabul and his body was placed in a gibbet outside the Old Fort (then called the Shergarh).

After Hemu’s death, a massacre of Hemu’s community and followers was ordered by Bairam Khan. Thousands were beheaded and towers of skulls built with their heads, to instil terror among the Hindus. At least one painting of such minarets is displayed in the "Panipat Wars Museum" at Panipat in Haryana. These towers were still in existence about 60 years later as described by Peter Mundy, a British traveler who visited India during the time of Jahangir.

Today, no one knows about this brave emperor, who saw Hindus and Muslims with same respect and had no religious differences. He had a dream of making India a better place, if only he could have done it.