On one fine day of 1719 AD, the courtiers of Mughal Emperor Muhammad Shah were having a heated argument about how to accurately calculate the auspicious date and time for Emperor’s travel plans. While they were fighting with each other, one member of the Mughal Durbar was sitting quietly, thinking, why don’t we have an instrument, which can give very accurate date and time. By this time, this courtier had decided that he will construct a high precision astronomical observatory.

This courtier was Saramad-i-Rajaha-i-Hind, Raj Rajeshwar, Shri Rajadhiraj, Maharaja Sawai Jai Singh II, Maharaja of Amer (later Jaipur). He was an ally of Mughals and had great interest in mathematics, architecture and astronomy. After the debate in court, he held a discussion with the Mughal Emperor, and took his approval on constructing astronomical observatories.

Jai Singh was influenced primarily by the Islamic school of astronomy. He studied the work of the great astronomers. Early Greek and Persian observatories contained elements that Jai Singh incorporated into his designs, but the instruments of the Raja Jai Singh’s observatories, are more complex, or at a much greater scale than any that had come before, and in certain instances, are completely unique in design and function. 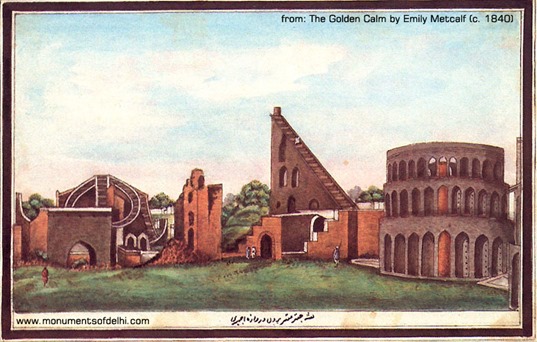 The first observatory was built in Delhi. Some people argued that the observatory was built in 1710, but Sir Syed Ahmed Khan, author of Athar-us-Sanadid correctly calculated the date as 1724. Raja Jai Singh had his estate near Delhi, which was known as JaiSinghpura. This estate today comprises of area from foot-hill of Raisina to Janpath and parts of Connaught Place. His palace/haveli/bangla was used by 8th Sikh Guru and is today known as Gurudwara Bangla Sahib.

After this first observatory in Delhi, he built similar observatories in Jaipur, Benaras, Ujjain and Mathura. The Ujjain observatory was painfully demolished by land mafia. Out of other 4, only the largest sundial, the Jaipur observatory is operational because rest 3 are surrounded by high rise buildings or trees, thus obstructing sunlight. All these observatories are accurate to half of a second, which is better than European instruments available at that time. 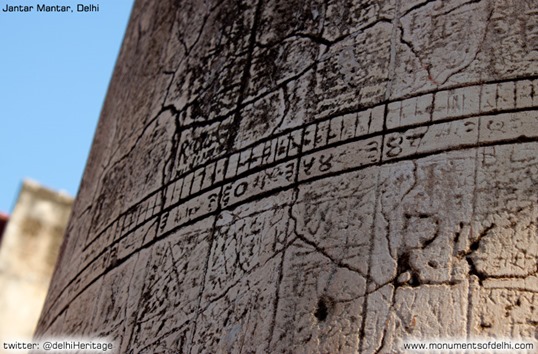 Originally, these observatories were called “Yantra” or “Yantar”. In many north Indian accents, people often pronounce “Y” as “J”. Thus, Yantar soon became Jantar. “Mantar” means a formula, or in this context, a calculation. Thus we get the present name for these observatories “Jantar Mantar”. 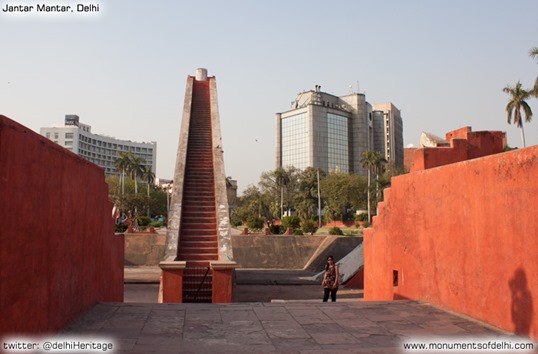 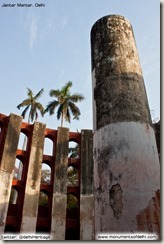 Samrat Yantra (supreme instrument): is ‘an equinoctial dial. It comprises of a triangular gnomon with the hypotenuse parallel to the earth’s axis, and on either side of the gnomon is a quadrant of a circle parallel to the plane of the equator’.

Jai Prakash Yantra: This consists of two concave hemispherical structures to ascertain the position of the sun and other heavenly bodies. It has a long tower with stairs attached to it, from which, the experts would accurately calculate time.

Ram Yantra: These are twin structures, circular in shape with pillar in centre. The walls and floor of which are graduated for reading horizontal (azimuth) and vertical (altitude) angles.

The Jaipur Jantar Mantar on the other hand, consists of 14 major instruments. These include the instruments from Delhi Observatory.

Each of the instrument is carefully angled at the latitude of the location where it is built. The height of each building and its marking are very carefully calibrated and an expert can predict eclipses, tell time, track stars and determine celestial altitudes and related ephemerides 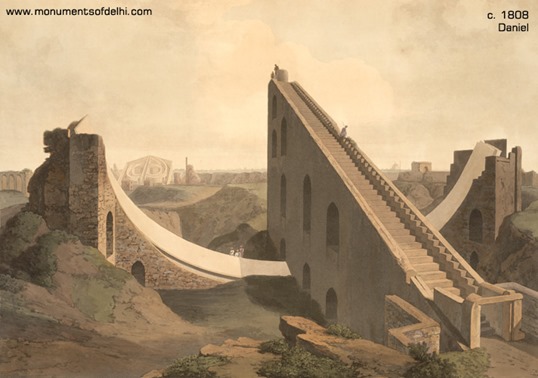 Jantar Mantars are instruments of high precision and excellent craftsmanship. Unfortunately, we have lost the art to modern clocks. However, we must respect the talent and hard work of our forefathers, who made the modern day possible.