American Uncle Sam is famous across globe. India had her own Uncle Sam, who came from a Parsi family and was once the most powerful man in country. He was popularly known as Sam Bahadur and made India proud at many fronts. This article is about Padma Vibhushan Field Marshal Sam Hormusji Framji Jamshedji Manekshaw, the commander in chief of Indian Army.

Born on 3rd April, 1914 to Captain Dr. Hormusji Manekshaw and Hilla in Amritsar, Sam was 5th of 6 children. He completed his education from Amritsar and from Nainital and joined Sherwood College. Wanting to become a gynaecologist, he requested his father to send him to London. But his father refused. He was unhappy with this and in those days, Field Marshal Sir Philip Chetwode was in process of setting up the Indian Military Academy. As an act of rebellion, Sam became part of IMA’s first intake against his father’s will.

During his IMA days, he appeared to be the most witty and notorious cadet. He had many firsts credited to his name like the first Gentleman Cadet (GC) to be awarded an extra drill and first GC to ask for a weekend leave. He was one of the first 22 cadets to graduate from IMA and commissioned as Second Lieutenants on 1st February 1935. Along with him, Muhammed Musa and Smith Dun also graduated, who later became the Army chiefs of Pakistan and Burma respectively, while Sam Bahadur took over as 8th Army Chief of India. General Manekshaw also became the first Indian Field Marshal.

Sam Manekshaw has always been the most outspoken and witty officer. Some of his statements have become history. Here are few:

1. On June 8, 1969, on the centenary of Sherwood College, speaking of his days at college, Sam said “College had prepared me for war in World War II as I learnt here to live alone and independently, to fight without relent, tolerate hunger for long periods and to hate my enemy.”

2. Speaking of Indian Army’s Gurkha Regiment (which he joined after passing out IMA), Sam said: “If anyone tells you he is never afraid, he is a liar or he is a Gurkha”.

3. When Prime Minister Indira Gandhi asked about readiness of Indian Army for 1971 war, he said “I am always ready sweetie”

4. One of his most apt comment was on politicians, when he said “I wondehe said “n politicianssidleger and then moved to Nainital and joined Sherwood College. This article is about most powerr whether those of our political masters who have been put in charge of the defence of the country can distinguish a mortar from a motor; a gun from a howitzer; a guerrilla from a gorilla, although a great many resemble the latter.”

5. During 1962 Indo-China war, Indian soldiers were retreating and Sam Bahadur was sent to command this army. He reached there and said: “Gentlemen, I have arrived and there will be no withdrawal without written orders and these orders shall never be issued.”

6. During Indira Gandhi’s tenure, there was a rumour that Army has grown so big that they will soon takeover. Prime Minister called Manekshaw and asked her about these rumours. Sam looked into her eyes and said: “You mind your own business and I mind mine. Your kiss your own sweetheart and I’ll kiss mine. I don’t interfere politically, as long as nobody interferes with me in the army.”

7. Manekshaw was his with 7 bullets during a battle and when he was taken to hospital, doctor tried to engage him in a conversation. He asked Sam what happened, to which he replied in his own witty style: “I was kicked by a donkey.”

8. He said “Pakistan would have won the 1971 war” when some reported asked him, what if he would have joined Pakistan along with the regiment he was serving in 1947.

9. In Mizoram, there was an armed conflict and the commanding officer was avoiding it. General Manekshaw sent him a pack of bangles with a note that read: “If you are avoiding contact with the hostile, give these to your men to wear.” The commanding officer then decided to get into battle with his unit and returned victorious. He was then presented with another note from the General that read “Send the bangles back.”

10. Indira Gandhi wanted to go on a war with Pakistan immediately but Manekshaw was asking for few months of preparation. When the ministers sitting in meeting pressurised him to get into action immediately, he protested verbally. Mrs. Gandhi requested everyone to step out of room and had a dialogue with Sam Manekshaw in private. As everyone left, Sam said: “Prime Minster, before you open your mouth, would you like me to send in my resignation on grounds of health, mental or physical?”

11. Before partition, Yahya Khan was working with Manekshaw in same unit. He purchased Sam’s motorcycle for Rs. 1000, which was never paid. During 1971 war, Yahya Khan was the president of Pakistan. After India stood victorious and Bangladesh was born, Manekshaw said: “Yahya never paid me the Rs. 1000 for my motorbike, but now he has paid with half his country.”

12. General Sam wanted to ensure that Indian Army never indulges in the brutal trends of victorious armies to spoil and dishonour the women of defeated land. So he instructed his men during 1971 war that “When you see a begum, keep your hands in pocket and think of Sam.” As a result, there was not even a single case of robbing/dishonouring by Indian Army.

13. When some ministers in a meeting objected that Sam always address Indira Gandhi as Prime Minister and not as ‘madam’, he reminded them that the title ‘madam’ is reserved for the head lady of a brothel. 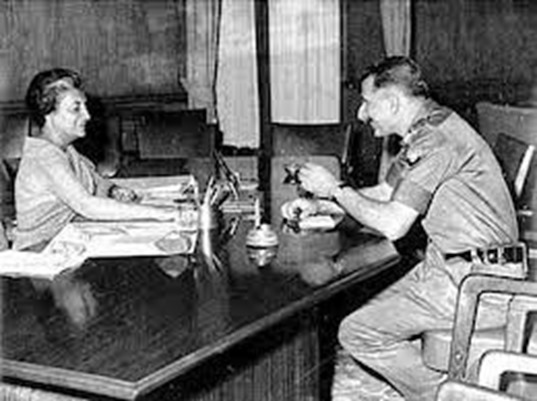 Although Sam was one of the most powerful, brave and jolly general we had, his style of speaking to politicians made some of our leaders uncomfortable. As a result, he was denied all the post-retirement privileges and was not even given due salary. It was only after President A.P.J. Abdul Kalam met him and ensured that his arrears of 30 years are cleared and he was then presented a cheque of Rs. 1.3 crore. On June 27, 2008, at the age of 94, Field Marshall Sam Manekshaw passed away in Military Hospital in Wellington (Tamil Nadu) due to complications from Pneumonia. He was put to rest in Parsi cemetery in Ooty, but his funeral was not attended by any politician or even military top brass.

One thought on “India’s Uncle Sam”