Archive for the tag “Kashmir”

This award, given to India in the form of “Radcliffe Line”, was the most bloody and painful gift ever. The Prime Minister Clement Attlee of the United Kingdom stood in London Parliament on 20th February 1947 and announced:

This plan got Royal Assent from King Geroge VI of England on 18th July 1947 as the “Indian Independence Act 1947”. It was “An Act to make provision for the setting up in India of two independent Dominions, to substitute other provisions for certain provisions of the Government of India Act, 1935, which apply outside those Dominions, and to provide for other matters consequential on or connected with the setting up of those Dominions.”

The Act’s stated that:

Following this act, Cyril John Radcliffe, 1st Viscount Radcliffe, a British Law Lord was sent to India on 8th July 1947. He was given just 5 weeks cut India into two parts, based on religion. Two separate boundary commissions were setup, one for Punjab and one for Bengal. Both were chaired by Radcliffe. The Punjab Boundary Commission consisted of Justices Mehr Chand Mahajan, Teja Singh, Din Mohammed and Muhammad Munir. The Bengal Boundary Commission consisted of Justices C. C. Biswas, B. K. Mukherjee, Abu Saleh Mohamed Akram and S. A. Rahman.

He started drawing the bloody line, which is popularly known as the Radcliffe Line. It divided India between the modern day India and the Pakistan (which later split into East and West Pakistan). 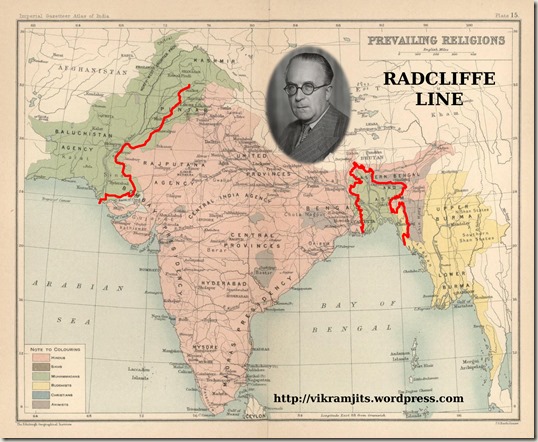