The Gandhak ki Baoli and Rajo.n ki Baoli (or Rajo.n ki Bae.n) are famous in Mehrauli. However, very few know about the underground Baoli of Dawood and lost Baoli of Aurangzeb, situated on either sides of Zafar Mahal. To the west of Zafar Mahal, there once existed a Baoli, said to have been built by Aurangzeb. It must now be buried somewhere under the houses. However, Dawood’s strucure is in more accessible shape.

Each day, hundreds of devotees flock to the shrine of Hazrat Khwaja Qutubuddin Bakhtiyar Kaki (r.a.) in Mehrauli, Delhi. Khwaja Kaki was the spiritual successor of Hazrat Khwaja Moinuddin Chisti (ra) of Ajmer. Numerous stories associated with his life make this area more important for devotees. With so many disciples coming in, basic necessities like Caravan Sarai with adequate supply of food and water was very important. It is said that one of the prime disciples of Khwaja, Sultan Iltutmish commissioned a Baoli in Dargah Complex. Situated in the rear of complex, near Majlis Khana, the Baoli today is hidden and hardly known. In 1844-46, a person named Hafiz Dawood spent Rs. 14,000 and built a huge audience hall over the steps of Baoli. He is said to be a favourite of Emperor Bahadur Shah Zafar. The roof of this Baoli is now well covered with marble and appears to be regular floor of Dargah compound, hiding the steps and tank beneath it. A small slit in floor in the south west corner, approached through the maze of few graves, lead you to a flight of steps that result in a locked door. The dedicated manager of Dargah, Janab Fauzan Ahmed, who is trying his level best to keep this Baoli clean and bring it back to life is always more than eager to open this lock for you and make the Baoli more popular.

As the door opens, you reach a hall, built by Dawood. It has huge colonial columns and girders with roof slabs. Another side leads you to the steps, that take you to the tank of Baoli. It was recorded that this Baoli is about 75 feet deep and this depth is scaled with just 74 steps. This 96 feet by 42 feet rectangular structure is built with rubble masonry and panelled recessed arches. The Baoli was open till early 1990s. People used to bath in it. Then it was closed due to some reason.

Towards east, the Well exists, which is open from top and covered by high rise houses on 3 sides. Unfortunately, houses connected to this Baoli used this well as a garbage pit. It was filled with garbage till 2013 and appeared to be totally dry. 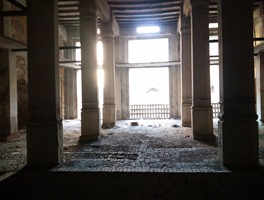 The Baoli was in a bad shape and well was more of a dumping pit. In 2013, government decided to clean it. By November 2013, in just 25 days, they had cleaned 5 meters, or roughly 600 cubic meters waste. During a conversation, I was informed by one of the seniors at Dargah that contractor who was employed by SRDC & PWD to clean Baoli tried to skip hard-work. He offered bribe to Dargah management, to file a report mentioning work completion to satisfaction. However, the honest Manager, Mr. Fauzan (in pic) refused. He returned that money to contractor and asked him to invest it further to clean it. He also informed government officials about this incident. As a result, Contractor had to work further and 5 more feet were cleaned, resulting in the Baoli getting filled with clean water. Had Mr. Fauzan accepted that bribe, this Baoli would still have been dry and dirty.

We also find traces of some restoration work done by end of 1800s or early 1900. This is confirmed by the use of an iron girder, that bears the date 1898. 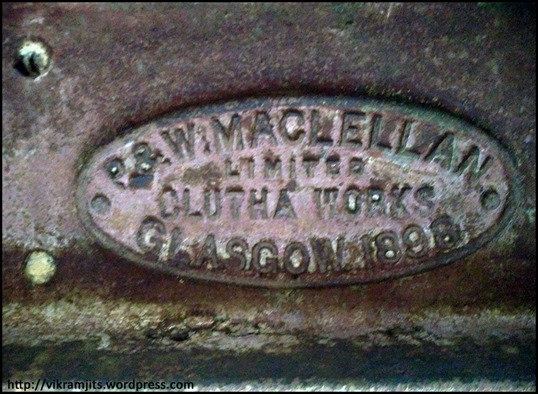